Kent Teacher of The Year Awards 2017 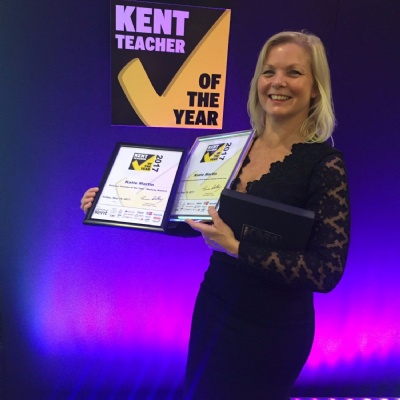 Well done to Katie Martin one our teachers here at The Rowans who has won the Kent Secondary School Science Teacher of the Year Award at this years Kent Teacher of The Year Awards.

Now in its 14th year, the awards event was staged by the KM Charity Team at the Mercure Great Danes Hotel, Maidstone. 50 finalists from across Kent and Medway attended the glittering evening, which was hosted by Simon Dolby, chief executive of the KM Charity Team, and Nicola Everett, news editor for KMFM.

A record 700 nominations were received and the winners were thrilled and humbled to be nominated for their efforts by members of their own community including pupils, parents and colleagues.

Mr Dolby said: “It gives me great pleasure to showcase the excellence and achievement taking place in the classroom every day. These awards are a big pat on the back to those going above and beyond the call of duty to ensure their pupils enjoy learning, build in confidence, and achieve their best.”

Winners were announced for each district followed by just 20 overall county champions. Cream of the teaching crop included our teacher Katie Martin who was the recipient of the Kent Secondary School Science Teacher of the Year Award.

She said: “We’ve heard fantastic stories about people that are changing lives and helping pupils to achieve next steps in life. There are champions of champions here and children need those in their everyday lives.”

The event aims to spread best practice to all schools and to this end the organisers have published and circulated a booklet containing details of each award win.

For more details on the Kent Teacher of the Year Awards, including photographs of this year’s event, visit www.kentteacheroftheyear.co.uk